As of 6 December 2021 the KNIR will check the green pass upon arrival.
Home > Evenementen > Public Lecture: Federico Finchelstein, On Why the History from the Margins is Central to Fascism and Populism

Public Lecture: Federico Finchelstein, On Why the History from the Margins is Central to Fascism and Populism

This hybrid public lecture by prof. Federico Finchelstein (The New School for Social Research, New York) is part of the KNIR Colloquium “Us versus Them. Exploring Transatlantic Practices of Fascism(s) and Populism(s) from the Margins” organized by dr. Maria Bonaria Urban (Director of Studies of History, KNIR), dr. Monica Jansen and dr. Reindert Dhondt (Assistant Professors, Utrecht University). 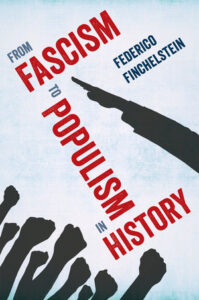 Biography Federico Finchelstein
Federico Finchelstein is Professor of History at the New School for Social Research and Eugene Lang College, New York, and Director of the Janey Program in Latin American Studies at NSSR. He has taught at the History Department of Brown University and he received his PhD at Cornell University.

Professor Finchelstein is the author of seven books on fascism, populism, Dirty Wars, the Holocaust and Jewish history in Latin America and Europe. His books have been translated into Spanish, Italian, Portuguese, Chinese, Hungarian, Korean and Turkish. His most recent book is: From Fascism to Populism in History (University of California Press, 2017 & 2019 with new preface). His previous books in English include, The Ideological Origins of the Dirty War (Oxford University Press, 2014) and Transatlantic Fascism (Duke University Press, 2010).