Birgit Meyer will be a resident KNIR fellow in May 2019. She will organize a workshop on religion and food and a masterclass on religion, images and the imagination. These activities are part of her current collaborative research project Religious Matters in an Entangled World, which she could set up thanks to the Spinoza prize and the Academy Professor Prize awarded to her in 2015 (www.religiousmatters.nl). The guiding idea of this programme is that religion becomes concrete and palpable through people, whose ideas and practices imply the use of various materials – including buildings, images, objects, food, and texts – and whose bodies and senses are shaped through these ideas and practices. Taking a material approach to religion, this research investigates the practices and material forms through which religions are present, coexist and possibly clash with each other in particular plural settings in Europe and Africa.

Meyer is professor of Religious Studies at Utrecht University. She has conducted anthropological and historical research on missions and local appropriations of Christianity, Pentecostalism, popular culture and video-films in Ghana. Trained as a cultural anthropologist (PhD in 1995), she studies religion from a material and postcolonial angle, seeking to synthesize grounded fieldwork and theoretical reflection in a multidisciplinary setting. Her research is driven by an urge to make sense of the shifting place and role of religion in our time, and to show that scholarly work in the field of religion is of eminent concern to understanding the shape of our world in the early 21st century. Next to her research in Ghana she has a strong interest in larger conceptual issues regarding the diverse manifestations of religion in past and present, and co-existence of people across and with religious, ethnic and cultural differences. Characteristic of her work is the attention paid to the corporeal, material and political-esthetic dimension of religion from an anthropological perspective. Visual culture and religious images play a strong role in her work.

Her most recent publications include Sense and Essence. Heritage and the Cultural Production of the Real (2018, co-edited with Mattijs van de Port, 2018), Taking Offense. Religion, Art and Visual Culture in Plural Configurations (2018, co-edited with Christiane Kruse, Creativity in Transition), Politics and Aesthetics of Cultural Production Across the Globe (2016, co-edited with Maruška Svašek) and Sensational Movies. Video, Vision and Christianity in Ghana (California University Press, 2015).  In 2010/2011 she was a fellow at the Wissenschaftkolleg Berlin. She is a member of the International African Institute and of the Royal Netherlands Academy of Arts and Sciences, and one of the editors of Material Religion. She is chair of the advisory boards of the Forum Transregionale Studien (Berlin) and the Centre for the Humanities (Utrecht University). In November 2017 she was William James guest professor at Bayreuth University. 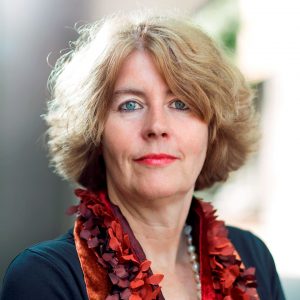