How did the Republic, as a new federal state, achieve its prominent international position in a Europe dominated by monarchies? In his talk, Helmer Helmers will answer this vital question by tracing the rapid buildup of Dutch diplomatic network after the declaration of independence with the Act of Abjuration (1581) and the Twelve Years’ Truce (1609), and by outlining how it sought to create a broad anti-Spanish alliance. Nina Lamal will focus on the Dutch alliance with the Venetian Republic and introduce the new digital edition project on Suriano’s diplomatic correspondence. In 1616, Christofforo Suriano arrived as the first Venetian envoy to The Hague as the Venetians needed foreign support in their war against the Austrian Habsburg. His weekly dispatches, more than 700 in total, sent between 1616 and 1623, are crucial for studying the development of official diplomatic relations between these two republics. 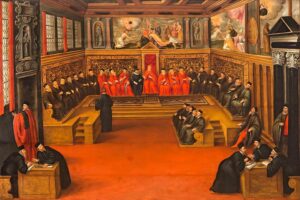 Helmer Helmers is senior researcher in early modern Dutch cultural history at the Humanities Cluster of the Royal Netherlands Academy of Arts and Sciences. He is author of The Royalist Republic (CUP, 2015) and co-editor of the Cambridge Companion to the Dutch Golden Age (CUP, 2018). Helmers’ research project Inventing Public Diplomacy in early modern Europe investigates the relationship between diplomacy and printed media during the early modern period.

Nina Lamal is postdoctoral researcher on the project Inventing Public Diplomacy at the Humanities Cluster of the Royal Netherlands Academy of Arts and Sciences. She is author of Italian communication on the Revolt in the Low Countries (Brill, forthcoming) and co-editor of Print and Power in early modern Europe (Brill, 2021). Lamal is editor and researcher on the correspondence of Suriano project (1616-1623) at Huygens.