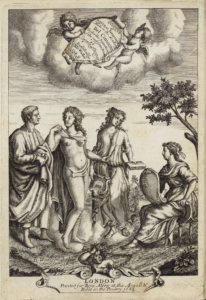 © Essayes Of Natural Experiments Made In The Academie Del Cimento, Under The Protection Of The Most Serene Prince Leopold Of Tuscany, Trans. By Richard Waller (1684)

In this paper, Prof. Sachiko Kusukawa surveys the various visual strategies developed by scientific academies and societies in early modern Europe. Attending to the imagery (broadly construed) associated with these institutions will, as she will be showing, offer insight into how these new types of institutions sought to define their identity and authority as an institution, whom they considered as allies or opponents of the type of knowledge they hoped to promote, and how such imagery was perceived by those inside and outside these institutions.

About the speaker
Sachiko Kusukawa is Honorary Professor of History of Science at the University of Cambridge and Fellow in History and Philosophy of Science at Trinity College, Cambridge. She is author of Picturing the Book of Nature (2012), is completing a biography of Andreas Vesalius, and co-authoring (with Felicity Henderson and Alexander Marr) a catalogue of images pertaining to the early Royal Society.