This lecture focuses upon heritage interpretation aimed at the public on the sections of the Frontiers of the Roman Empire World Heritage Site within the UK (The Antonine Wall and Hadrian’s Wall) and can be followed live or online.

This lecture focuses upon heritage interpretation aimed at the public on the sections of the Frontiers of the Roman Empire World Heritage Site within the UK (The Antonine Wall and Hadrian’s Wall). On these two former frontiers, heritage venues (museums and monuments) are seeking to communicate information for past lives in ways that encourage tourism while also communicating the dignity of all cultures, past and present. This provides challenges for a World Heritage Site that was constructed as a boundary to the dominion of a world-famous ancestral empire.

Part of the challenge for those who work in academia and heritage practice is to seek to erode a strong public perception of the Roman frontiers as a strictly military environment through an exploration of the cultural diversity of these ‘borderscapes’ (border landscapes). The paper will call upon recent initiatives on both Roman frontiers to assess how stakeholders are seeking to promote UNESCO’s mandate of encouraging peace and understanding in the difficult economic and political climate. 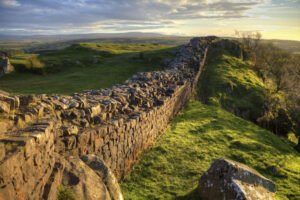 About the speaker
Richard Hingley is Professor of Archaeology and Director of the Centre for Roman Culture. He is the author of Hadrian’s Wall: A Life (Oxford University Press, 2012), which explores the life history of this significant Roman monument, trying to explore it from cultural and antiquarian perspectives. This includes a brief exploration of various poems that have drawn upon the Wall, including works by Rudyard Kipling and W.H. Auden, along with some more recent poems included in the art project ‘Writing on the Wall’ (2006).
His work also considers how scholarship can sometimes kill-off public interest in the monument while art tends to bring it to life. This is addressed in general terms in a recent article: ‘Living Landscape: reading Hadrian’s Wall’, Landscapes 12. 2 (2011) 41-62.