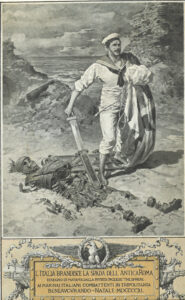 In most western countries, the history of Classical Archaeology is inextricably linked with the history of colonialism and Italy is no exception to that rule. The institutionalization and professionalization of archaeology as a scholarly discipline in the post-unification period took place against the backdrop of the country’s first (and rather unsuccessful) attempts to colonize parts of the Horn of Africa. During the first decade of the 20th century an increasingly aggressive climate developed. Incited by ardent nationalist politicians and writers who demanded Italian overseas territories, the Italian government declared war on the Ottoman Empire, resulting in the Italo-Turkish war in 1911. The northern strip of today’s Libya was occupied and the colonies of Italian Tripolitania and Cyrenaica (merged into Italian Libya in 1934) were established.

Needless to say that the war and subsequent occupation served Italian goals and interests in the first place, but both were presented as an inevitable civilizing mission to the benefit of the local people. Archaeology and Roman history played a pivotal part in a grand narrative that was created from the start, a myth of uninterrupted Roman/Italian efforts to bring prosperity, culture, and well-being to savage shores. In this talk I will focus on the role of archaeology in the Italian colonies and on the role of the colonies for the development of Italian archaeology in the early 20th century.

About the speaker
Nathalie de Haan is a university lecturer in Ancient History at Radboud University Nijmegen. Her research interests include Roman baths and bathing, Flavian Rome, Reception Studies and the history of archaeology.

FUTURISMOON – Presentation of Irma Boom’s BAV AGENDA 2023
15 december 2022
The Assimilation of Mesoamerican Gods in a Visual Theory of Religion. From the Codex Vat. Lat. 3738 to the Work of Lorenzo Pignoria
25 januari 2023
Workshop: Visualising Global, Local and Glocal in Roman Archaeology
3 februari 2023