Please note that you can also register for the projection of the documentary film “Hidden Pages” that follows this KNIR Research Dialogue. For more information and on how to register, go here.

The history of Italian colonialism, which began a few decades after the unification of the country in 1861, accompanied its events until the end of the Second World War, and had an appendix from 1950 to 1960, when Italy (now a Republic) was awarded the trusteeship on Somalia from the United Nations.
In this way, the colonial projects of the various governments were first intertwined with the project of the formation of the nation, a vexata quaestio of the liberal age; then with Mussolini’s aspiration to regenerate and “fascistise” the national body, and finally also with the need to give new content to being Italian after the Ventennio and the Second world war.
Through the cultural materials produced over this period of time (school textbook, comics, propaganda posters, newspapers), the lesson aims to understand the relationship between discourses, practices and projects linked to the Italian presence in the colonies, especially in Africa, and the meaning assumed by the idea of Italianness. 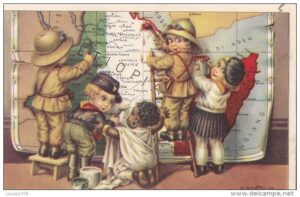