The botanical and zoological compendiums “authored” by Francisco Hernández (1515-1587) are among the most important scientific projects of the early modern era. They originated when Phillip II appointed Hernández, a physician and humanist scholar devoted to Pliny, to collect information about materia medica in the Americas. Portions of the resulting work were widely disseminated in manuscript and print in the late sixteenth and seventeenth centuries, including the Rerum medicarum Novae Hispaniae thesaurus (1648 -1651) published by the Accademia dei Lincei. Scholars have long recognized the role of Indigenous labor in the creation of these compendiums. I will further propose that the expertise of Nahua intellectuals – and Indigenous epistemology in Mesoamerica broadly – was even more foundational to this singular project than has heretofore been known. The presentation will focus will on texts and images concerning animals in Mexico (“De historia animalium Novae Hispaniae”) and their relationship to the “cosmogram” tradition of the Borgia group of tonalamatl (codices) and the practices around taming wild animals (familiarization). 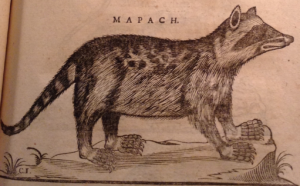 About the speaker
Marcy Norton is associate professor of History at the University of Pennsylvania and is currently a visiting scholar at the Max Planck Institute for the History of Science in Berlin. She investigates the history of science, technology, the environment, and human-animal relations in the early modern Atlantic World, particularly entanglements between Native communities in Mexico and Greater Amazonia and Iberian colonizers. Her publications include Sacred Gifts, Profane Pleasures: A History of Tobacco and Chocolate in the Atlantic World (Cornell University Press, 2008) “The Chicken or the Iegue: Human-Animal Relationships and the Columbian Exchange” (American Historical Review 2015) and “Subaltern Technologies and Early Modernity in the Atlantic World” (Colonial Latin America Review, 2017). Her book, Tame and the Wild: People and Animals after 1492, will be published next year by Harvard University Press.