Content
In this practicum students will learn how to publish the architecture, human remains and artefacts from excavated tombs. More specifically, students will document and study funerary contexts excavated by the Groningen Institute of Archaeology and the Soprintendenza of Rome in the Monte Del Bufalo cemetery of the protohistorical Crustumerium, a Latin settlement located on the Tiber north of Rome. Crustumerium was founded in the mid-9th c. BCE and abandoned in the early 5th c. BCE when its territory became part of Rome’s countryside. Currently over 400 tombs have been brought to light, ranging in date between Latial periods IIB (mid-9th c. BCE) to the end of the Archaic period (480 BCE). This period comprises the so-called Orientalizing period (730-580 BCE), in which potters at Crustumerium produced a characteristic ceramic repertoire such as the amphora shown in the illustration.

Content
Lectures, museum and site visits will make students familiar with the pre-Roman funerary archaeology of South Lazio, while practical work will be focussed on preparing excavated tombs for digital publication through hands-on engagement in KNIR’s laboratory. Students will learn about tomb typologies, the ways of deposition of the human body at death and the disposition, typology and function of the artefacts in the tombs. The practicum will also go into aspects of conservation and restoration. In the library students will work on the contextualization within the funerary culture of Latium of the artefacts they documented in the laboratory and the tomb contexts they described on basis of available excavation documention. To learn the steps it takes to come from Excavation to Publication, students will work according to a set protocol adopted in the Crustumerium Publication Project. In their final report tomb students will interpret their case study using current theoretical approaches in the archaeology of death.

Guest lecturers: to be announced 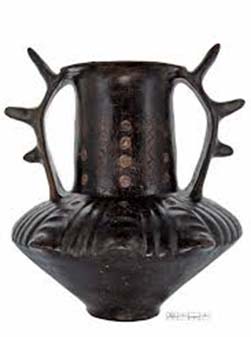 Amphora from a funerary context at Crustumerium

Target group and admission
“Tombs from Excavation to Publication” is an intensive practicum on location in Rome at the Royal Dutch Institute intended for Bachelor 3, Master and Researchmaster students in archaeology. Students are selected on the basis of prior study results and a letter of motivation. In these respects, the KNIR didactical practice distinguishes itself from the regular academic teaching at Dutch universities. Participating students will be evaluated on their capacity to familiarise themselves with the subject matter in an autonomous way, reporting and active participation during group work and discussions.

Credits and assessment
The study load is the equivalent of 10 ECTS (280 hours). Each student should arrange with his/her home coordinator whether the practicum can be a part of the existing curriculum. After successful completion of the practicum the KNIR provides a certificate mentioning study load and evaluation.

Facilities in Rome
All participants will be housed at the Royal Netherlands Institute in Rome’s Villa Borghese Park. From there, it is only a short walk to the historical center of Rome. The KNIR accommodation consists of shared bedrooms and bathrooms, and includes a living and dining space, a large kitchen, washing machine and wireless internet. All residents have 24/7 access to the library and gardens of the Royal Netherlands Institute.