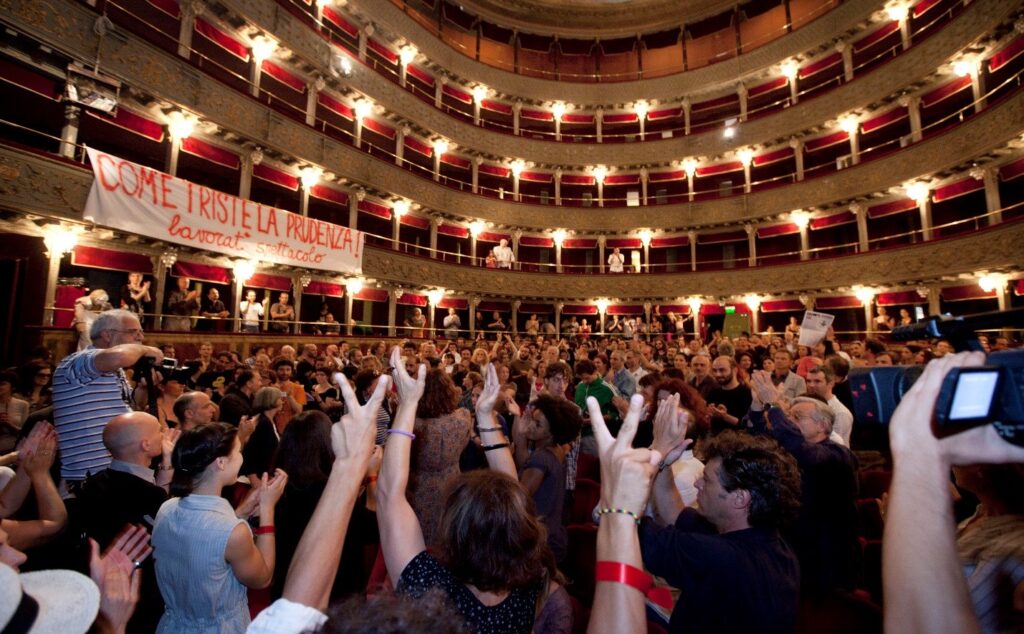 𝐂𝐡𝐢𝐚𝐫𝐚 𝐃𝐞 𝐂𝐞𝐬𝐚𝐫𝐢 is Associate Professor in European Studies and Cultural Studies at the University of Amsterdam. Her wide-ranging research explores how forms of memory, heritage, art, and cultural politics are shifting under conditions of contemporary globalization and state transformation. One strand of work explores how artists and activists are reclaiming and reinventing cultural institutions. Chiara is leading a major NWO-funded project on this theme, named “Imagining Institutions Otherwise.” Another concerns the transnational politics of memory and cultural heritage, above all in the West Bank. Her monograph, 𝘏𝘦𝘳𝘪𝘵𝘢𝘨𝘦 𝘢𝘯𝘥 𝘵𝘩𝘦 𝘊𝘶𝘭𝘵𝘶𝘳𝘢𝘭 𝘚𝘵𝘳𝘶𝘨𝘨𝘭𝘦 𝘧𝘰𝘳 𝘗𝘢𝘭𝘦𝘴𝘵𝘪𝘯𝘦 (Stanford UP, 2019), argues that Palestinian civil society has enrolled museums and urban regeneration initiatives to assert its distinct cultural heritage amid the enduring Israeli occupation. Still another focuses on colonial legacies in contemporary Europe. Chiara is currently co-writing another monograph, provisionally titled 𝘊𝘶𝘳𝘢𝘵𝘪𝘯𝘨 𝘵𝘩𝘦 𝘊𝘰𝘭𝘰𝘯𝘪𝘢𝘭, which explores how museums are reframing colonial histories in response to postcolonial critiques. Across these interests, Chiara has published many articles in journals such as 𝘈𝘮𝘦𝘳𝘪𝘤𝘢𝘯 𝘈𝘯𝘵𝘩𝘳𝘰𝘱𝘰𝘭𝘰𝘨𝘪𝘴𝘵, 𝘊𝘶𝘳𝘳𝘦𝘯𝘵 𝘈𝘯𝘵𝘩𝘳𝘰𝘱𝘰𝘭𝘰𝘨𝘺, and 𝘔𝘦𝘮𝘰𝘳𝘺 𝘚𝘵𝘶𝘥𝘪𝘦𝘴, and co-edited two key volumes in memory studies (𝘌𝘶𝘳𝘰𝘱𝘦𝘢𝘯 𝘔𝘦𝘮𝘰𝘳𝘺 𝘪𝘯 𝘗𝘰𝘱𝘶𝘭𝘪𝘴𝘮, Routledge, 2019; 𝘛𝘳𝘢𝘯𝘴𝘯𝘢𝘵𝘪𝘰𝘯𝘢𝘭 𝘔𝘦𝘮𝘰𝘳𝘺, de Gruyter, 2014) and a special issue of the 𝘐𝘯𝘵𝘦𝘳𝘯𝘢𝘵𝘪𝘰𝘯𝘢𝘭 𝘑𝘰𝘶𝘳𝘯𝘢𝘭 𝘰𝘧 𝘏𝘦𝘳𝘪𝘵𝘢𝘨𝘦 𝘚𝘵𝘶𝘥𝘪𝘦𝘴 on urban heritage and gentrification (2018). Committed to international and interdisciplinary collaboration, she has been involved in several major international research projects. Currently, she is part of the HERA’s “en/counter/points” project, the Trans-Atlantic Platform for Social Innovation’s “Worlding Public Cultures” network, and the “Pressing Matter: Ownership, Value and the Question of Colonial Heritage in Museums” NWO NWA project.

𝐀𝐫𝐢𝐚 𝐒𝐩𝐢𝐧𝐞𝐥𝐥𝐢 is an independent curator and a PostDoc Researcher at the University of Amsterdam. Her PhD analysed relations of curatorial practice to social imagination and performativity. Her main area of research is the investigation of the relationship between art, activism and political theory. She holds a bachelor’s and master’s degree in art history, visual arts and curatorial studies. Founding member of the artistic and curatorial collective Radical Intention, from 2018 top 2020 she was associate researcher and member of the curatorial team of the project 𝘛𝘩𝘦 𝘐𝘯𝘥𝘦𝘱𝘦𝘯𝘥𝘦𝘯𝘵 at the MAXXI – Museum of the XXI century for art (Rome) . Between 2015 and 2020 she collaborated as external curator at the Pistoletto Foundation (Biella) and BOZAR, Center for Fine Arts (Brussels). She has published many articles and she is the editor of the publication ‘Shaping Desired Futures’ (NERO, 2018). Between 2009 and 2012 she was curator at the Isola Art Center (Milan).