Debates about the ‘end’ of the Roman era, how, when, and even if it ended, are still very much alive and raging. However, what happened after the (long) late antique period is a lesser-known and lesser-studied subject. The post-Roman past needs, however, as much energetic investigation and discussion. Exploring this important historical phase, typified both in terms of continuity and change, was the aim of the course ‘Byzantine Rome: Unknown Archaeology and History of the Eternal City (400-1000 AD)’.

‘Rome after Rome’ was organised by Professor Joanita Vroom and Mink van IJzendoorn (MA) of the Faculty of Archaeology (Leiden University) in collaboration with Dr Tesse Stek, the scientific director of the Royal Netherlands Institute in Rome (KNIR). During ten days (from 11 to 21 October 2021), a group of BA and (R)MA students from different universities and diverse disciplines and Leiden’s two lecturers discussed post-Roman archaeology and history at the KNIR in Rome. The main focus was the transformations of the city of Rome from Late Antiquity to the Early Middle Ages. Also, Rome’s close connections with the Byzantine Empire, as revealed by travel and trade in the medieval Mediterranean and beyond, were points of discussion.

Walking in and talking about a city after Antiquity
Obviously, there were a lot of lectures on a wide range of topics and views on post-Roman Rome. Besides the two organising lecturers, Vroom and Van IJzendoorn, several other scholars from various disciplines and institutes gave guest lectures. The topics of the talks ranged from the use of ancient Greek statues in medieval and Renaissance Rome to Adriatic Sea commerce, as well as from Sicily between ‘Christian’ and ‘Islamic’ worlds to the Venetian colonisation of Crete, and even to the Aksumite Empire in East-Africa and the Red Sea area and many more.

Next to lectures and group discussions, excursions and a material practical were part of the course. During most afternoons, the group visited historical monuments and places in Rome, such as (post-)medieval churches, the Forum Romanum and the Via Appia combined with early Christian catacombs deep under Rome. Also, some museums were visited, including the Cypta Balbi Museum and the National Museum of the Middle Ages. All this involved a lot of walking and the indispensable usage of Italian public transport. Nevertheless, this provided the participants with a sense of vastness, both regarding the scale and diversity of the urban landscape of Rome in past and present. In short, it was an inspiring and challenging experience.

There was also time for students to study independently, prepare their presentations and work on their final essays. They could use the institute’s library 24/7, one of the many excellent facilities offered by the KNIR to visiting students and scholars alike. 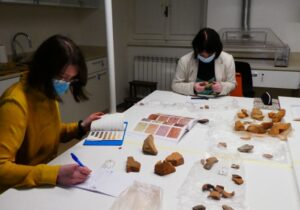 The newly-installed material culture lab in the KNIR offered students the chance to work with medieval ceramics.

Seeing and sharing archaeology
‘Byzantine Rome’ was first and foremost a course in archaeology. As such, some hands-on experience with tangible medieval material culture was a great asset. The newly-installed material culture lab in the KNIR was a great advantage. In small groups and with the help of the lecturers, the students could touch, document and interpret potsherds. These ceramic finds were recently collected during the field work project in Molise led by Dr. Stek. This practical experience with pottery, for some of the students their very first time, helped to familiarise them with actually handling artefacts and to get a deeper understanding of the archaeological record. Appreciating its complexity regarding study opportunities and limitations proved complementary to the lectures and discussions often based on similar archaeological data and research.

Less monologue, more dialogue
Student-teacher interaction and collaboration were central to this course. Discussing theories and interpretations prevalent in medieval Mediterranean scholarship and working together during material studies proved a successful educational strategy for all parties involved. The students had the opportunity to talk to and work closely together with different specialists in a small-scale and informal setting. This low-key open approach to instruction also resulted in moments of learning for the participating teachers and scholars in this course. They got fruitful feedback and questions from the students with diverse backgrounds and experiences, thereby enhancing the knowledge and skill of both. Furthermore, the students could join several expert talks and evening debates organized by the KNIR, wherein current academic issues on everything ‘Italian’ were discussed.

For archaeology and (art) history students from Leiden and other Dutch universities interested in post-Roman Rome, Byzantium and the Mediterranean Middle Ages, the course ‘Byzantine Rome’ will return to the KNIR!