Public Lecture: The Afterlives of Italy’s Fascist Party Headquarters from 1945 to Today 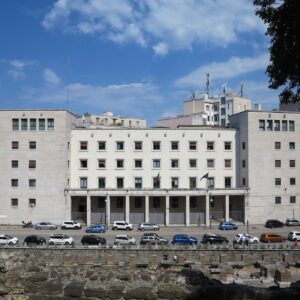 Since the end of the Second World War, Italians have faced the question of what to do with the physical traces of the Fascist regime, and whether to preserve, demolish, alter, or renovate buildings and monuments of that era. Fascist sites represent a difficult heritage that it is too important to be ignored, but which also elicits divisive and painful memories. The roughly 5000 headquarters of the Fascist Party, or case del fascio, which were built across Italy between 1922 and 1943, are a perfect example of that difficult heritage. Having been created to represent Fascist party, they became redundant after its dissolution. While they lost their original purpose, they were recycled to serve new uses. In taking on new meanings in the light of an evolving culture and politics, they became comfortably integrated into Italian towns and cities. The treatment of the case del fascio is emblematic of how Italy has dealt with its Fascist past across the postwar period. Today, as the rule of a far-Right government fuels anxieties around the lasting legacies of Fascism, the case del fascio illustrate the creative and complex ways in which those legacies have been handled.

About the speaker
Hannah Malone is Assistant Professor in Contemporary History at the University of Groningen. After completing a PhD at the University of Cambridge, Hannah worked as a research fellow and lecturer at the British School at Rome, Magdalene College Cambridge, the Freie Universität, and the Max Planck Institute for the History of Emotions in Berlin.
Her research uses architecture as a window onto the nature of memory and politics. She is author of a book entitled Architecture, Death and Nationhood: Monumental Cemeteries of Nineteenth-Century Italy (Routledge, 2017) and has recently completed the manuscript of a book on Fascist Italy’s military ossuaries (sacrari) of the First World War.
As NWIB Visiting Professor at the KNIR in 2023, Hannah will investigate what happened to Italy’s Fascist Party Headquarters (case del fascio) after the fall of Mussolini’s dictatorship in 1945.